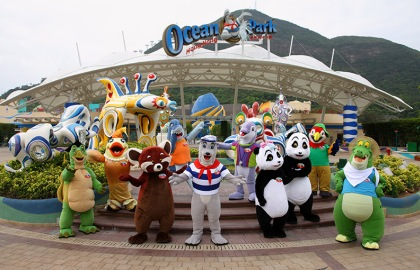 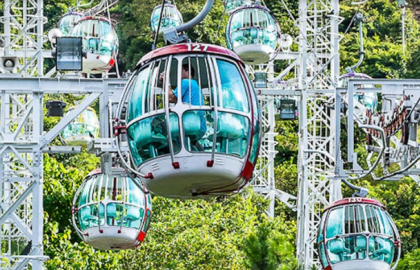 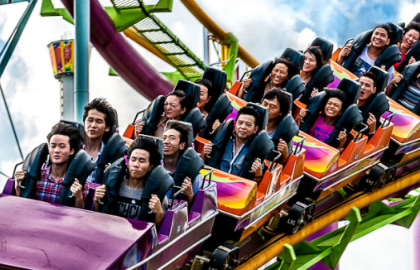 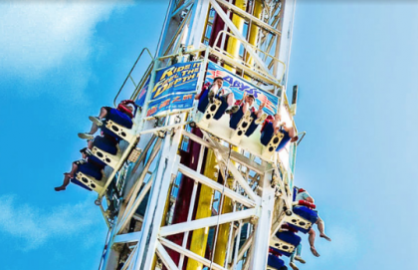 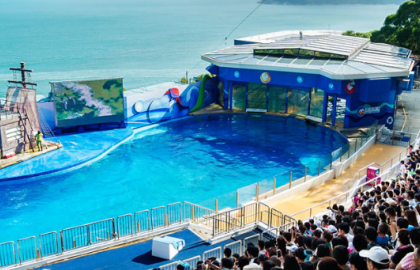 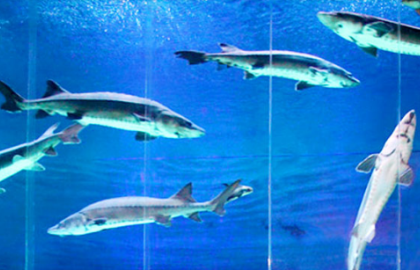 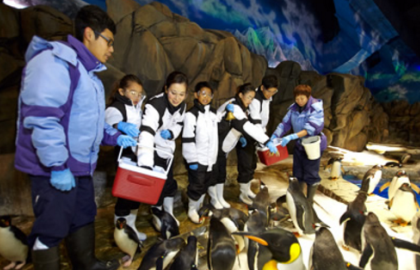 Ocean Park, situated on the southern side of Hong Kong Island, is Hong Kong's premier educational theme park. The current park covers more than 915,000 square metres of land and features a diverse selection of world-class animal attractions, thrill rides and shows divided between The Waterfront and The Summit. Operated by the Ocean Park Corporation, a statutory board, it is a not-for-profit organization that aims to provide elements of entertainment, education and conservation at an affordable price.

The park has consistently rejuvenated and reinvented itself to better serve its guests, establishing itself as a major tourist attraction both locally and abroad. Since its opening more than 30 years ago, close to 100 million guests have visited Ocean Park. Over 7.7 million guests visit Ocean Park each year. In 2006, Forbes.com named Ocean Park one of the "10 Most Popular Amusement Parks in the World", and in 2007, Forbes Traveler ranked Ocean Park as one of the "50 Most Visited Tourist Attractions in the world". In 2012, Ocean Park received the 2012 Applause Award and three Brass Ring Awards from IAAPA (International Association of Amusement Parks and Attractions). Ocean Park was ranked 12th in the world, 4th in Asia and 1stin China for annual attendance by the TEA/AECOM Attraction Attendance Report 2013.

Ocean Park was officially opened in January 1977 by the then Governor of Hong Kong, Sir Murray MacLehose. It was built at a cost of HK$150 million funded by the Hong Kong Jockey Club with land provided for free by the Hong Kong Government. Between 1982 and 1984, the Hong Kong Jockey Club allocated a further HK $240 million to fund the Park's second phase of development, which included facilities at Tai Shue Wan and thrill rides at the Headland. The objectives were to diversify the Park's attractions, increase its popularity and revenue and utilize more fully the land granted by the Government.

In 2005, Ocean Park announced a HK$5.5 billion Master Redevelopment Plan (MRP)to build the Park into the world’s best marine-based theme park, doubling the amount of animal and ride attractions, from 35 to over 80, and firmly establishing itself as a world-class, must-see landmark that will further strengthen Hong Kong as a premier tourist destination. Attractions opened under the MRP include: Amazing Asian Animals, Ocean Express, Aqua City, the Rainforest, Thrill Mountain and Polar Adventure. The brand new Aqua City, showcasing a Grand Aquarium with 3 levels of viewing galleries approximately four times the size of the Atoll Reef; the Amazing Asian Animals themed-area, which incorporates the themed Giant Panda Adventure, highlighting some of Asia's rarest creatures; a redeveloped children's area called Whiskers Harbour and an array of refreshment and retail facilities. At The Summit, guests can visit the Polar Adventure to feel the chill of the North and South Pole, or journey down river rapids to discover the beautiful Rainforest. Thrill seekers hunting for excitement need look no further than Thrill Mountain. The Ocean Express opened in 2009, it was built to transport up to 5,000 people per hour in each direction between The Waterfront and The Summit in less than 3 minutes.

Going hand in hand with the leaps Ocean Park has made in terms of developing itself are the numerous achievements the Park has earned for its achievements in the field of animal conservation. As a member of the World Association of Zoos and Aquariums (WAZA), we continuously strive to maintain the welfare of the animals under our care, encourage audiences to respect the environment and help our community conserve it. The Park has gained accreditation from the Association of Zoos and Aquariums (AZA) over three consecutive five-year accreditation cycles and is the first institutional member in Asia to earn this important recognition and validation of responsible animal care. Ocean Park is also aligned with WAZA’s animal welfare strategy and provides valuable contributions to this important element of biodiversity conservation. The animal welfare standards at the Park were also audited by the American Humane Association under its Humane ConservationTM on-site assessment programme. It has demonstrated that Ocean Park has a culture and staff dedicated to providing the best care and welfare for the animals in its collection.

The Park's continuing commitment to animal conservation is reflected in the successful breeding programmes undertaken for its unique collection of insects, fishes, birds and marine mammals. Births of rare shark species, sea lions, sea horses and different species of jelly fish have been recorded, while endangered birds and butterflies are also being hatched and reared at Ocean Park. Research and development into breeding marine mammals via artificial insemination (AI) produced the world's first bottlenose dolphin pregnancies through AI in 2000. This was followed by the births of the world's first two bottlenose dolphin calves achieved via AI in May 2001.

The Cable car and The Ocean Express are two main transportation to enable guests to move between The Waterfront and The Summit. The 1.5 km long cable car system offering not only just a convenient but also exceptionally scenic route between these two areas, with spectacular panoramic views of the southern side of Hong Kong and the South China Sea.

The Summit is home to Ocean Park's many thrill rides, including Hair Raiser, Whirly Bird, Bumper Blaster, The Flash and Rev Booster. There are also rides such as the Dragon, Crazy Galleon, Ferris Wheel, Flying Swing and Abyss in the Marine World nearby. The Ocean Theatre is a family favourite where dolphins and sea lions participate in lively daily shows that both entertain and educate its audience about the habitats of these marine mammals. At the unique Sea Jelly Spectacular, guests can interact with 1,000 beautiful sea jellies set against stunning music and multimedia displays. As one of the tallest observation towers in Southeast Asia, the Ocean Park Tower boasts a 360º gently rotating viewing room 72 metres above ground that enables guests to see clear to Aberdeen and the outlying islands. And Pacific Pier brings a slice of the sunny Californian coast to Hong Kong, complete with an interactive underwater exhibit view of the sea lions at play.

The Waterfront features Ocean Park's latest themed-area, the Amazing Asian Animals – an educational and highly entertaining collection of exhibits bringing together some of Asia's rarest animals. Red Pandas will be making their debut in Hong Kong for the first time ever at the Giant Panda Adventure, which will also house giant pandas Ying Ying and Le Le. A viewing pavilion of hundreds of shimmering goldfish, including some of the latest and rarest species, can be found at Goldfish Treasures. For the bird watchers, the Panda Village offers a great opportunity to spot Ocean Park's avian friends high above the trees, as well as visit some delightful Asian Small-clawed Otters. Finally, children will love the Whiskers Harbour, an area made especially for them, with a large and exciting array of kid-sized and kid-oriented rides. The whole family can join in at the Whiskers Theatre, where live shows take a fun peek at a day in the life of Ocean Park's sea lions.

For guests' dining needs, Ocean Park currently offers seven spectacular venues, Neptune’s Restaurant, Ginger Grill, Tuxedos Restaurant, the Bayview Restaurant, the Terrace Café, Café Ocean and the Club Panda. Neptune’s Restaurant is Hong Kong’s first and only fine dining destination in an aquarium setting, while the Aqua City Bakery serves famous Hong Kong-style pastries. The Club Panda, a uniquely panda-themed indoor and outdoor café certain to delight the entire family. Café Ocean, located on the Summit, is based on the concept of the classic Hong Kong-style café with a wide selection of local gourmet menus. Guests can also indulge in the oceanic ambience at the Bayview Restaurant, featuring an aquatic backdrop with sea jellies, or enjoy alfresco dining at the relaxing Terrace Cafe with its breathtaking sea view. You can also dine at Tuxedos Restaurant and marvel at over 70 penguins frolicking on the ice. Both the Bayview Restaurant and the Terrace Café offer extensive international menus as well as unbeatable views of the South China Sea.

Terms and Conditions:
1. The customer must provide at least one of the comrades’ name (same as the identification) and contact details for verification.
2. The customer is required to carry their printed electronic ticket or vouchers as the admission evidence.
3. We do not liable for any E-ticket/voucher which didn’t be used within the validity/designated date.
4. Issued voucher/tickets are non-refundable, non-cancelable, non-changeable, non-endorsable, non-transferrable, non-extendable.
5. For repair, maintenance, inclement weather or other reason, Operator may suspend the operation of any ride or close any attraction at any time without prior notice. It is a condition of sale of the admission ticket that any request for refund, whether partial or in full, for the tickets purchased by visitors will not be considered by the operator or our company as a result of such ride suspension or closure of attraction.
6. Our company reserves the right and has absolute discretion in determining the interpretation of the terms and condition.

Terms and Conditions of General Admission Ticket:
1. Free admission is granted to children under 3 years old.
2. Local senior residents aged 65 years old or above with a Hong Kong Identity Card or the "Senior Citizen Card" issued by Social Welfare Department and holders of a Registration Card for people with Disabilities and Hong Kong residents with a Hong Kong Identity Card visiting on their birthday may enter Ocean Park free of charge. Free admission ticket can be redeemed at the ticketing counter.
3. Holders of a "Registration Card for people with Disabilities" issued by the Labour and Welfare Bureau are free to enter Ocean Park and one accompanying guest can enjoy half-price admission.
4. Any child (aged 11 or below) must be accompanied by an adult (aged 15 or above) when entering Ocean Park.
5. Upon presentation of a "Certificate of Comprehensive Social Security Assistance Recipients (for Medical Waivers)" /"Notification of Successful Application" and own personal photo identification document, individuals and members of families receiving assistance from the Comprehensive Social Security Assistance Scheme (CSSA ) can enjoy a special admission rate of HK$20 when purchasing tickets at the Ocean Park Main Entrance.
6. Hong Kong residents may simply present their Hong Kong identifying documents or Hong Kong Birth Certificate to enjoy free day time admission on their birthday. This is not applicable to private banquets and evening charters.
7. General admission tickets are valid on the date during its period of validity and the park opening-times. For specific events, separate purchase of special event tickets is required.
8. Due to repair, maintenance, weather or other considerations, the Park may temporarily suspend any rides or attractions without prior notice. It is a condition of sale of the Park's admission ticket that any request for a refund, whether partial or in full, for the tickets purchased by visitors will not be considered by the Park as a result of such ride suspension or closure of attraction.